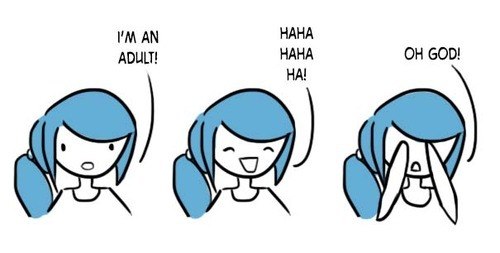 A quick message to the non-adults; don’t do it! It’s a set up.

This thing called adulting is extremely hard. I think my parents and every adult I came across as a child owe me both an apology and a serious explanation for not informing me of the full responsibilities and works that come hand-in-hand with being an adult. They set me up for the adult life and I wasn’t even given a say in it.

Growing up, I have always wanted to be years older so as to fit in with my siblings and my cousins as well as their friends.

I remember too well the remarks they would make; “you’re not old enough”,” you’re too young to understand”,” it’s for adults only”,” you’re underage” etc (you get the draft) and I remember each time they said those, I would be extremely upset and I would talk to Georgina or Violet about it, depending on who had my time at the moment. (Georgina and Violet were my dolls. Georgy was named after my very first best friend from my infant days whom I lost contact with when we moved, so in case you’re reading this, please hit me up!).

But here I am many years later and with stress in my eyes and a kink in my back I admit, adulting is hard.

This is something I’m confident to say I’m not alone in. I know many fresh adults sometimes sit and realize how great the burden of adulthood brought along with it when it came knocking. I remember being 17 and waiting anxiously to turn 18 and then to turn 19. Now I’m 20 and I pause. I was so eager to become older that I didn’t give myself the chance to truly experience the years that were supposed to be fun and carefree. Adulting isn’t as easy as they make it look and here are a few reasons why. 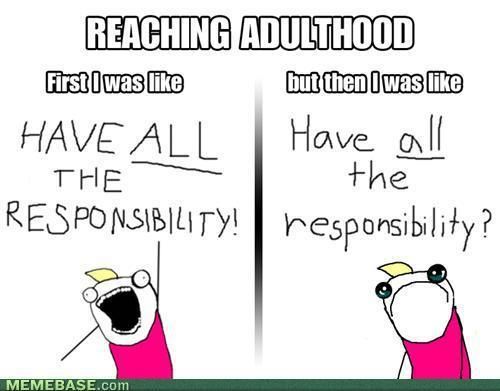 As you get older, these quadruple in number at an exponential rate! For me, it meant having to own up to even the littlest of mistakes and having to think things through before actions because each choice made would reflect in the near or distant future and that meant being extra aware so as to avoid the “had I known” scenarios.

Also becoming an aunt last year gave me more responsibilities (this isn’t my baby, so if it was I wonder how I would cope. Big ups to you sissy! You’re doing an excellent job!), like having to be the ‘adult figure’ in charge when my sister had to work and having to enforce rules and stand firm when I’m used to being the ‘fun, easy going’ one (sometimes), and having to be able to think fast and act smart – one day I was with the baby and she stuck something into her mouth when I looked away for a second and started choking. I went all 911 paramedics/ emergency team on her in a split second and this resulted in cracking my phone screen, but I didn’t care because getting whatever she swallowed out of her was priority.

In life, we have to make a lot of choices and everyday too. Sometimes I wish I was 4 again and didn’t have to worry about things and have my mummy make all the choices for me from what breakfast should be to what I will do for a day. But most-times I’m grateful for the power of choice. I’ve had to make some life altering choices and I’m in the process of discovering if they were the right or wrong choices.

Living up to expectations/ norms

You’re expected to know all of a sudden what you want to do in life and where you want to head and they should be in line with the expectations the world has for you. You have to get a degree, serve for a year, get a masters degree and get a job. Oh and don’t forget about getting married and starting a family and thinking about a Phd or becoming a professor. The world must know you’ve arrived and achieved the regular things set out for you. 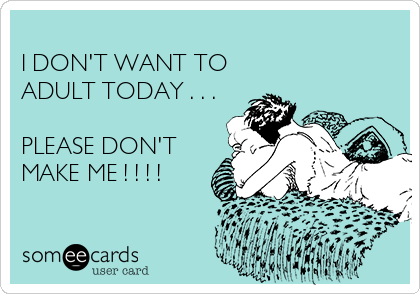 I’ve had my fair share of this believe me. By relationships, I don’t only mean dating but also friendships and they hurt. That doesn’t mean they only start at adulthood, but that they’re more disappointing then. This is because as you become older, you tend to expect more from people and they tend to drop your expectations. I’m guilty of this but that doesn’t make it any easier.

You can only explain so much. Life in general happens when adulting begins. It has it’s ups and downs but in all, it’s a necessary part of life and I must say, I’m getting a hang of it.

What are your takes/ experiences on adulting?

Leave a Reply to Uyai By Eno Cancel reply

At the risk of sounding super dramatic, 23 was a lot and I am glad to be leaving it behind.
We’re talking about loss. Loss as in death.
Story 6 is a lesson I learnt and got today. ⁣
What is the obsession with peoples weight/ bodies?⁣
An ode to the simpler times, that I miss but am grateful we left behind. I was raised by a village, definitely. The influence of family both immediate and extended contributed greatly to the woman I am today.⁣
What song comes to mind for this photo?⁣
How’s your day going?
#IITA was the place that gave more than I expected/ imagined. After lusting over @cassiedaves , @bigchiefenkay and @largerthanlifealice snippets of the place, I said to myself, this place I must go.
One thing that’s helping me to find peace is accepting that relationships are not by force, and they can end no matter how much you want them to last. ⁣